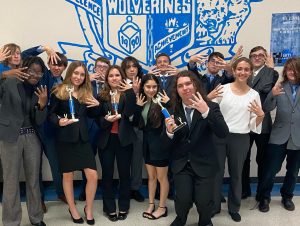 Wellington Speech & Debate had a great experience in hosting the initial PBCFL of the 2022-23 school year on Saturday, September 24. I admit, I had a few concerns headed into the tourney. The first tournament of the year is always an interesting experience, as we have a ton of new students, new parents, new coaches, and new volunteers trying to navigate their way through the complex world of competitive speech and debate. But I received numerous compliments from teachers, coaches, judges, and competitors on how smoothly things ran all day, and that’s huge props to everyone that was a part of the day. In particular, the student volunteers were praised for their attention to detail, their enthusiasm, and their work ethic. I could not be prouder of how they represented what is good and amazing about the young adults and future world leaders we have in my program.

Seven members of the Red Dawn Debaters took home trophies in Congressional Debate, and another seven earned gavels as presiding officers at the tournament.

Placing third in their respective chambers were novices Brandon Burt and Melody Pratz.

Thank you again for an amazing day! And congratulations on a successful endeavor!