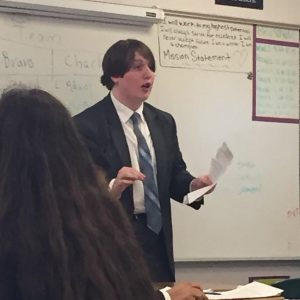 In CONGRESSIONAL DEBATE, around 18-22 students from various schools will congregate in a classroom for debate on federal legislation proposed by the students themselves.Here is a sample partial docket that could be seen in a congress chamber:School A: A Bill to Impose Sanctions on IranSchool B: A Bill To Combat The HIV/AIDS Epidemic In Sub-Saharan AfricaSchool C: A Resolution to Disband Immigration and Customs EnforcementSchool D: A Resolution to Abolish Affirmative ActionSchool E: A Bill to Support ESEAN to Deescalate Tensions in the South China SeaStudents will research topics and give three-minute-long speeches on the various topics. The class will teach students how to research, outline, and formally present speeches, plus learn cross-examination techniques.Video of Congressional Debate: https://www.youtube.com/watch?v=HQ07Dmc1L0g

LINCOLN DOUGLAS DEBATE features one person on each side. Propositions of value are debated with the emphasis on developing logical argumentation rather than an accumulation of information. Students will learn values analysis, argumentation skills, sound and ethical use of persuasion, and clear audience-centered communication. The topic changes every two months.Video of Lincoln Douglas Debate: https://www.youtube.com/watch?v=2O3ppc-UC2s

WORLD SCHOOLS DEBATE is a 3-on-3 debate event which features a dynamic format combining the concepts of “prepared” topics and “impromptu” topics, encouraging debaters to focus on specified issues rather than debate theory or procedural arguments. This highly interactive style of debate allows debaters to engage each other, even during speeches.Video of World Schools Debate: https://www.youtube.com/watch?v=5WEChQ6fNQw