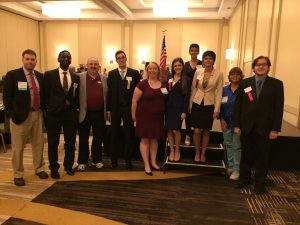 Florida Oceanfront students wrecked it at the 2016 NSDA National Championship in Salt Lake City – a pretty amazing set of results for our third-year district. As chair of our district, I could not be prouder of our students and coaches and their individual and collective success!

US Extemporaneous: Michael Wang, Dreyfoos School of the Arts

US Extemporaneous: William Brodnar, Oxbridge Academy of the Palm Beaches

In addition, Boca Raton was awarded a Debate School of Excellence award, and Dreyfoos School of the Arts a Speech School of Honor award! 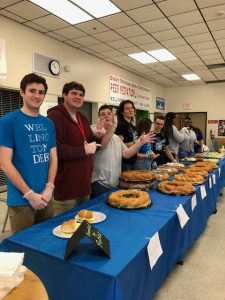 Wellington High School hosted the 2016 Florida Forensic League Novice State Championship debate tournament Friday and Saturday. More than 650 competitors from across the state – some from as far away as the Panhandle – were in attendance, as were some 250 judges, 50 coaches, and around 50 Wellington Debate parents (headed this year by the power twins of Sue Ann McDaniel and Amy Yeackley) and volunteer students. Our volunteer parents and students busted their tails all weekend, helping solve numerous issues before they happened, and devising creative alternatives when they did occur, and all around making my life far less stressful than I have a right to enjoy.

Hosting a debate tournament isn’t easy, especially considering the coordination of classroom usage, providing meal options for 1,000 people, operation of a functioning judge lounge and concessions stand, and so much more. I have been blessed for 16 years as a coach with amazing parents who are able to take a monster project like this and make it come to fruition virtually without a hitch, from my days at South Fork High School and at Wellington. I am equally blessed to work with a phenomenal administration and staff, who let me take over the campus for nearly 36 hours to use around 100 classrooms, and a custodial staff which is vastly underpaid for the amount of work they put in making me look better than I am to my coaching peers.

Wellington has great success this weekend. Taylor Peterson was 4th in Declamation! Kalena Miles & Sophie Reuther were semi-finalists in Duo Interpretation! Taylor Peterson was a semi-finalist in Oral Interpretation! We earned seven new National Speech & Debate Association degrees: both Taylor Peterson and Scarlet Jasperson earned their Degree of Excellence (150+ points); Joseph Long, Anthony Marton, and Emma Yeackley each earned the Degree of Honor (75+ points) and varsity letters; and both Natalie Bellber and Derry Bryant earned the Degree of Merit (25+ points). Wellington’s degree strength for 2015-16 is now at 306, the first time in our history we have eclipsed 300 degrees on record in a single school year.

I am forever in debt to the amazing volunteers who helped make this weekend a success – in no particular order: Tina Slaughter, Karen Mangini, Katerina Mangini, Sharon Radcliff, Amy Yeackley, Dominique Kruisland, Phil Aikey, Gary and Bridget Schloss, Jackie Bernard, Claudia Kaye, Allison Jacobson, Cathy Negron, Scott Fairchild, Randi Clein Shane, Marianne Davis, and of course all the students of Wellington Debate who judged rounds, worked the concession stand, did ballot filing/running, assisted in the judge lounge, helped run meal lines, sold t-shirts, assisted in tab room, directed competitors and judges to classrooms, cleaned the campus, and helped in many other ways. If I missed anyone, I humbly apologize. 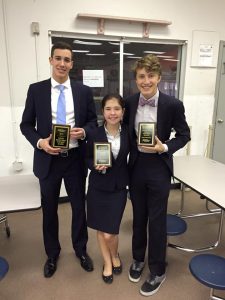 Three members of the Wellington Debate Team will be representing the @RedDawnDebaters in Salt Lake City this June at the 2016 National Speech & Debate Association National Championship.

The Public Forum Debate team of Caramen McDaniel & Connor Yeackley went undefeated and earned the top seed and a return trip to the NSDA national championship. They will be joined by Victor Sanchez, who placed second in the Florida Oceanfront NSDA District’s Congressional Senate last month. 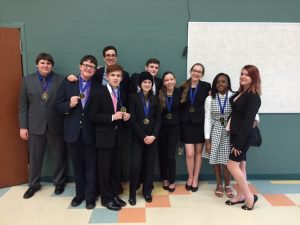 {Victor Sanchez has already informed me that he will not be attending CatNats, and that Bennett Aikey will be representing Wellington and the PBCFL in his place.}

Wellington Debate represented the school and community proudly at the 2016 UPenn Liberty Bell Classic in Philadelphia last weekend. The Public Forum Debate team of Sara Casey and Julie Cesta went 4-2 in preliminary rounds and advanced to partial double octafinals, and both Mason Graham and Zachary Jacobson broke to semifinals in Congressional Debate. Jacobson also passed the 250-point plateau and earned his NSDA Degree of Distinction.

Ocean’s 11, meet Welly’s 11, since that’s how many Wolverine Debaters are heading to the state championship in Orlando next month!

Victor Sanchez placed 10th overall in Congressional Debate at the 2016 Barkley Forum. He placed third in both his preliminary chamber and semifinal round.

I got home last night around 830pm after spending more than four hours trying to finalize today’s Florida Oceanfront NSDA District Congress national qualifier. Several last-minute student drops has cut us to our minimums in both the senate and collective house; we were at eight schools represented in the senate and 61 legislators in the house setup. One more drop would mean either losing one of three houses (and reducing the number we send to nationals out of the chambers from three to two) or losing the senate (and losing two potential national qualifiers). I went into today optimistic but overly concerned. 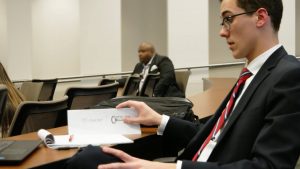 This morning, by 745am, it was clear that final drop wasn’t going to take place. What resulted is one of the smoothest tournaments I’ve ever been associated with. Both three-hour-long sessions went off on time. Due to inclement weather, we revamped our lunch plans, and instead of leaving the Palm Beach State College (Gardens campus) Classroom Building for the on-campus cafeteria, we ordered in 25 pizzas, went out to grab bottles of water, and kept things internal for competitors and judges alike.

Awards were done by 430pm, and our district is sending six amazing students to Salt Lake City this June in Congressional Debate.

I may be our district chair, but there is no way I could accomplish anything without an amazing group of fellow coaches and debate alumni in making today work as effectively as possible. Thanks to Traci Lowe, Angie Weber Anyzeski, David Childree, Bonnie Cohen, Phyllis Pacilli, Cindy Robinson, Ryan Wells, Justin Weaver, Jesus Caro, Megan West, Robert Knight, Richard Sena, Leah Carolan, PJ Samorian, Daryl Hall, Veneta Natasha Bahadoorsingh Gilchrist, Deena R. McNamara, Kevin McNamara, William Fetzko, Rachael Blum, Javy Mora, Sara Altschuler, Lonnie Martens, Cassidy Cresswell, and anyone else I may have missed in this commentary who made today a success.

Additional thanks to Trish Patty Gunnels Zenczak, Deano Pape, Lisa Vossekuil and Timothy E. Sheaff from the national office and Joy of Tournaments for your assistance, ideas, and listening ears. Hey, no frantic calls to Scott Wunn this year!

Success at the final PBCFL “regular season” tourney of the year for your Wellington Debaters!

The Public Forum Debate team of Caramen McDaniel & Connor Yeackley advanced to double-octafinals at the 2016 Sunvitational, while Victor Sanchez broke to semifinals in Extemporaneous Speaking. 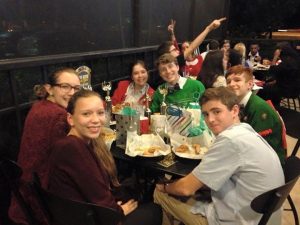 The Red Dawn Debaters took care of business in a good way today, as Wellington’s 40-strong crew took home a plethora of hardware and honors from the December PBCFL at Palm Beach Central High School.

The tournament was followed with an afterglow and holiday party at Buffalo Wild Wings, where 30 debaters and parents congregated. A “white elephant” gift exchange took place, and Chris Slaughter defended his “Ugly Holiday Sweater” title.

Victor Sanchez advanced to semifinals in Congressional Debate and quarterfinals in Extemporaneous Speaking at the 2015 GMU Patriot Games Invitational. 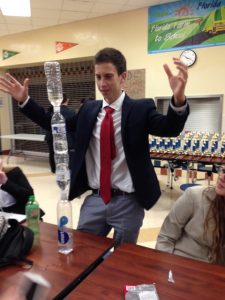 Wonderful results out of the PBCFL @ Olympic Heights!

Wellington’s Congressional Debate Crew had an excellent showing at the 2015 Titan Invitational. All four Wellington congressional students – Bennett Aikey, Matias Galguera, Manuel Hernandez, and Victor Sanchez – advanced to semifinals, with Sanchez advancing to the final round!

Victor Sanchez advanced to the semifinal round of Congressional Debate at the University of Florida’s Blue Key Invitational.

The lead-in to Wellington’s Homecoming dance Saturday night? Success at the October PBCFL hosted by Palm Beach Lakes during the day! Let me count the ways! 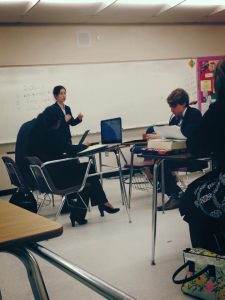 The first PBCFL of Wellington Debate’s 2015-16 Championship Season is in the books, and what a day it was! Forty-seven @RedDawnDebaters (39 competitors, five varsity judges, three adults) traveled via charter bus to Martin County High School for an invasion of epic proportions, and when the dust settled, 17 members of Group WellyWorld had earned accolades. 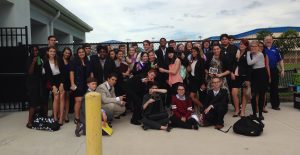 Victor Sanchez advanced to the semifinal round of Congressional Debate at the 2015 Yale Invitational. 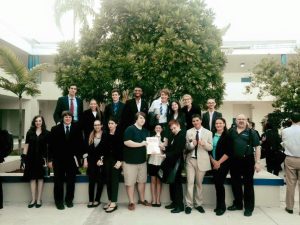 Varsity member Karina Frandjian was 7th in her chamber. Both she and Eileen Wheelen acted as presiding officers in their respective chambers.

In Public Forum Debate, the team of Caramen McDaniel and Connor Yeackley went 4-1, losing in the fifth round and narrowly finishing out of the top six places. Julie Cesta and Sara Casey went 3-2 in their first PFD tournament.