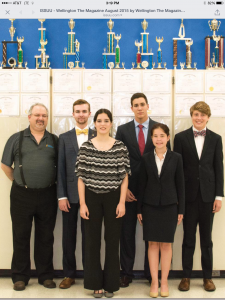 For the first time in my debate coaching career, I had students debating in rounds on Day 4 of the NSDA National Championship. Both Greg Foster and Caramen McDaniel were in advanced rounds of Extemporaneous Debate on the fourth day of the tournament.

Greg Foster and Mike Leatherman went 10-2 in Public Forum Debate prelim rounds, the best record Wellington debaters have had in NSDA prelims, and advanced to Round 8.

Kwadjo Walker continued to display total professionalism, something that has been on exhibit for four years. He finished seventh in his prelim Senate, missing out on advancing to semis by four speaker ranks. Like his brother before him, his debate career ends in Texas.

Caramen McDaniel and Connor Yeackley gained a wealth of experience on the national circuit, and will bring that knowledge base back to the team to help Wellington Debate remain strong in the debate forum.

I believe Mike will have 2,154 NSDA honor points on record after the results are audited, and Greg will have 2,082. {This would make them 1st and 2nd all-time in Wellington history.} Kwadjo will have around 1,160 – I don’t know Congress speech results yet, I’m just guestimating based on the number of speeches he gave and his presiding over a session. {This would rank him 12th all time in Wellington history.} I believe Caramen will have 880 and Connor 651. {Sidebar: these are estimates!}

It was, as usual, wonderful to see and be with so many amazing students and coaches from across the nation, and to hang out with those from Palm Beach County (in particular Traci Lowe, Melissa Gifford, Christina Calaluca). It was also wonderful to see WHS ’03 debater Lauren Medoff for lunch! 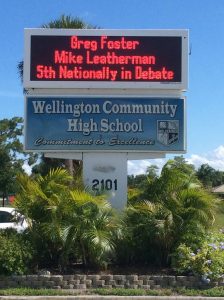 So very proud of the @RedDawnDebaters who represented Wellington High School at the 2015 NCFL Grand National debate championship tournament in Ft. Lauderdale. Greg Foster and Michael Leatherman were quarterfinalists in Public Forum Debate, finishing FIFTH PLACE OVERALL with a 7-1 record out of 224 entries, and Victor Sanchez was a semifinalist in Congressional Debate. And Savannah Race, while not advancing, was at her third consecutive CatNats. A shout out to SueAnn McDaniel, who was amazing in the ballot stuffing department (helping Coach Paul Gaba and Suncoast HS Coach Traci Lowe), along with six Wellington volunteers: Caramen McDaniel, Connor Yeackley, Chris Slaughter, Julie Cesta, Sara Casey, and Brandon Schloss – we rocked it! Many thanks to Susan Solove for volunteering to help us by representing Wellington in the judge pool. 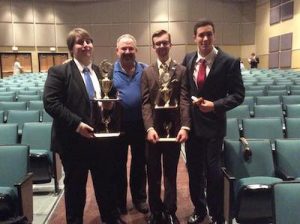 The Wellington Boys Basketball team was not the only Wolverine pack to experience success the last weekend of February. Wellington Debate’s Public Forum Debate team of Greg Foster & Michael Leatherman placed third overall at the Florida Forensic League state championship at Orlando’s Timber Creek High School. The team of Fosterman lost in semifinals on a 2-1 ballot to eventual state runner-up Nova High School. And in Congressional Debate, the @RedDawnDebaters’ Victor Sanchez advanced to the final round, placing 11th overall.

After a 13-hour-day which ran about as smoothly as a tournament can when faced with a rapidly diminishing judge pool, WE HAVE RESULTS! Before I get to them … a HUGE shout-out to the hard workers who assisted in making this tournament a success. MANY THANKS to Kristie Taylor and Daryl Hall for running extemp prep, Angie Weber for ballot check-in, Mierka Drucker for judge call, and Traci Lowe for assisting with tabulation. I take great pride in knowing we have a solid group of professionals who can run excellent debate tournaments. AN EQUALLY HUGE SHOUT-OUT TO THE PARENTS AND STUDENTS WHO VOLUNTEERED AND/OR JUDGED FOR WELLINGTON TODAY AND HELPED MAKE THE TOURNEY A SUCCESS! They include Robyn Gasso, Sue Ann McDaniel, Amy Yeackley, Michael Jaeger, Dominique Kruisland, Sharon Radcliff, Paula Deaver, Scott Epstein, Alexa Fortuna, David Solove, Susan Solove, Kevin Solove, and anyone I may have missed. (I was in tab for most of the day; if you were on campus and I didn’t mention you here, it’s because either I never saw you or I’m so exhausted I can’t remember right now – my humble apologies!) 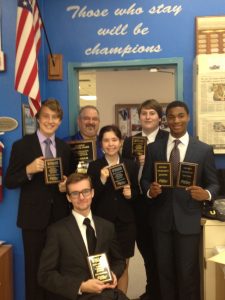 The Public Forum Debate team of Greg Foster & Michael Leatherman won the 2015 LBC Public Forum Debate Round Robin – the second time in three years Wellington has captured the RR championship. It also gave Wellington four LBC championships in four years. Foster & Leatherman advanced to double-octafinals of the regular tournament as the ninth seed before being eliminated. (Eight of the top nine seeds, including the top six, were all knocked out of competition in double-octafinals.) Victor Sanchez advanced to semifinals in Congressional Debate.

Kwadjo Walker will be the third-ever member of Wellington Debate to represent Wolverine Nation and the @RedDawnDebaters in Congressional Debate at the National Speech & Debate Association’s National Championship Tournament. Kwadjo qualified for the Dallas tournament through a strong performance Saturday, February 7, at the Florida Oceanfront NSDA District Congress Qualifier at West Boca High School. Also earning accolades was the Public Forum Debate team of Greg Foster & Michael Leatherman, who went 4-0 and placed first overall at the PBCFL tournament at West Boca. 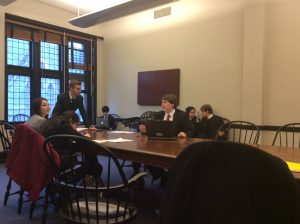 The Public Forum Debate team of Greg Foster & Michael Leatherman advanced to double-octafinals as the 13th seed before dropping to Cypress Bay.

At the 2015 Sunvitational in Ft. Lauderdale, Kwadjo Walker represented Wellington Debate in a national final varsity Congressional Debate round for the first time, and received accolades from multiple judges and observers for his professionalism. Greg Foster & Michael Leatherman advanced to the double octafinal round of Public Forum Debate, with Foster being recognized as 8th-best overall speaker in preliminary rounds. Foster & Leatherman also competed in the prestigious Sunvitational PFD Round Robin Debate on Friday at the BB&T Center in Sunrise. Rounds took place in stadium suites. The team narrowly missed advancing to the championship round while facing some of the best and most talented PFD teams in the nation.

NEW NATIONAL SPEECH & DEBATE ASSOCIATION DEGREES AND PLATEAUS: Leatherman improved on his all-time Wellington Debate NSDA honor point record; he now has 1,634. Foster surpassed the 1,500-honor-point “Degree of Premier Distinction” level – the fifth to do so in Wellington history. He now has 1,559, which is second-most all-time.
Caramen McDaniel eased past the 500-point plateau and earned the NSDA Degree of Special Distinction. Pallavi Taneja earned her Degree of Excellence by surpassing the 150-point mark. Karina Frandjian achieved her Degree of Honor and will receive her varsity letter at the debate banquet this spring. Coach Gaba is extremely proud of the 14 #‎RedDawnDebaters who competed at USchool! 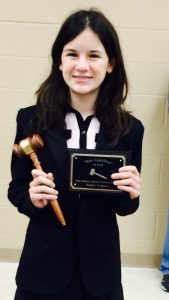 In Extemporaneous Duo, the team of Gabby Baillergeau and Brianna Fortuna placed fifth. 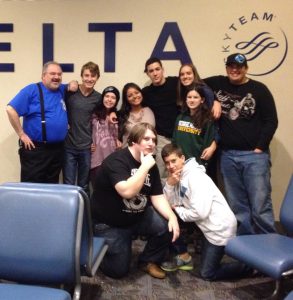 At GMU December 4-8, the Public Forum Debate team of Greg Foster and Mason Graham advanced to double-octafinals, and Victor Sanchez broke to the semifinal round of Congressional Debate. Connor Yeackley earned his National Speech & Debate association Degree of Distinction. Overall, it was a pretty solid experience. Special thanks to Bill Wheelen for helping as a chaperone/driver/judge, and making the weekend even more enjoyable than it would have been otherwise.

Wellington Debate hosted the PBCFL tournament Saturday, November 15. Roughly 450 students from more than 20 area schools converged on the campus. The entire Wellington varsity was on hand either competing, judging, or volunteering, along with about 15-20 debate parents. Coach Gaba cannot express how deeply moved he is by the amazing dedication, professionalism and effort the #‎RedDawnDebaters put forth to operate a virtually flawless tournament. He was continually amazed by what my debate families achieve for our program, and can never repay the immense debt he owes them for all they do on a regular basis. Special thanks to (in no particular order) Robyn Powell Gasso, Sue Ann McDaniel, Paula Deaver, Sharon Radcliff, Bill Wheelen, Tina Slaughter, Karen Rutkowski Mangini, Michelle DeLaura, Caroline Laseter Melton, Michael and Janell Leatherman, Dominique Kruisland, William Pincus, Gary Schloss, Thomas & Melissa Davison Race, Dylan Race, and Amy Yeackley.

In Dramatic Performance, Savannah Race picket fenced her rounds and earned 398 of a possible 400 speaker points en route to a first-place trophy at the November 2014 PBCFL hosted by Wellington! 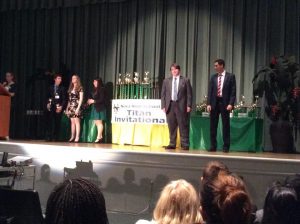 SO DAMN PROUD! Wellington PFD had a great run at the 2014 Titan Invitational, November 7-8, in Ft. Lauderdale. The Public Forum Team of Greg Foster & Victor Sanchez went 8-1, losing in quarterfinals. It was Victor’s first PFD tournament. Michael Gasso earned his NSDA Degree of Excellence. Both Sanchez and Mason Graham are each within five points of their NSDA Degree of Distinction. Foster hit 1,375 NSDA points, passing Alexa Fortuna ’14 into sixth all-time in Wellington Debate history.

The #RedDawnDebaters of Wellington High School had a day of success and being the bridesmaid at the October PBCFL hosted by Seminole Ridge High School. Taking home honors were Victor Sanchez and Connor Schwinghammer in Congressional Debate, and Casey Mangini in Lincoln Douglas Debate. Sanchez placed 3rd in his chamber, while Schwinghammer was fourth in his, and both took home Chambers Choice Presiding Officer gavels, while Mangini placed sixth in LD. 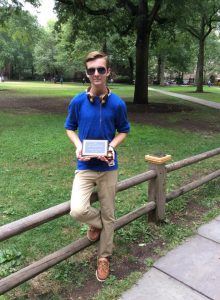 Wellington had two students attend the 2014 Yale Invitational – both in Congressional Debate – and both achieved success in New Haven, Connecticut, September 20-21. Michael Leatherman advanced to the final round of Congressional Debate, placing 13th overall, while Kwadjo Walker represented Wellington in the semifinal round. Walker earned his NSDA NFL Degree of Superior Distinction, surpassing the 750-point level.

Wellington opened the 2014-15 tournament season in Miami on September 13, where Congressional Debate legislators Michael Leatherman and Victor Sanchez both placed in their respective chambers. Wellington brought four novice debaters to their first tournament of their career, with all presenting “clash” speeches as part of their indoctrination into debate.