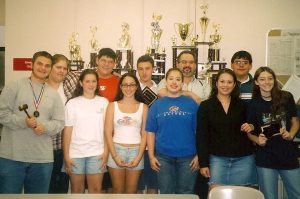 The Wellington Speech & Debate Program sharpens your ability to research and analyze problems, think and listen critically, express your thoughts clearly and fluently, and better understand public affairs. It increases your confidence and poise and provides constant intellectual stimulation. You will have opportunities to compete against some of the best students from other schools in Florida and across the nation. Many executives, lawyers, teachers, public relations officers, radio and television personalities, and prominent public figures testify to the benefits of their forensics participation. In fact, almost 80 percent of the current members of Congress debated competitively, and almost every U.S. President going back to (but not including) Harry S Truman debated. Many of them found lifelong friends through their involvement. They also gained valuable skills for use in their careers.

Studies have also shown that colleges and universities rank forensics as among the most valued experiences a student can have when applying for college. Many of the most prestigious colleges in America (including most Ivy League schools) offer debate scholarships and preferential admissions consideration to top-flight high school debaters. (A recent study showed the single most important factor in college admission to Ivy League and National Universities was participation in speech, debate and/or drama.)

In the professional world, another recent survey of employers conducted by a national recruiting firm found forensics experience to be the most highly valued experience an applicant could site, among 31 factors listed in the survey.

What else does debate offer? The challenge of an academically rigorous activity that rewards critical thinking, research, writing and presentation skills. Exposure to peers (from both Wellington and other schools) who are academically superior and demonstrate leadership qualities. And from the students perspective, competing can be extremely fun and rewarding, the trophies are beautiful, the college campuses are exciting, the friendships are lasting and the sense of accomplishment and growth is exhilarating!