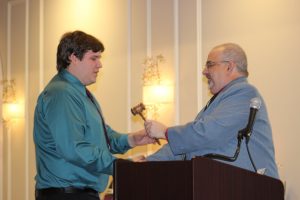 The Wellington “Spirit of Debate” Golden Gavel is not awarded based on trophies or tournament success, number of tournaments, number of National Speech & Debate Association honor points, or any other barometer of “success.” There is no application process. It is awarded to a student or students annually in recognition of character, assistance of the coaching staff even when not asked for help, working with high school and middle school debaters, and being an overall role model for the rest of the program, the school, and the community as a whole.