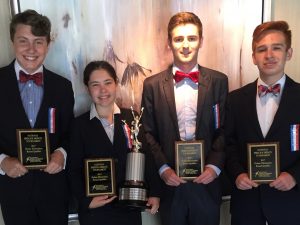 The Florida Oceanfront NSDA District World Schools Debate team of Caramen McDaniel, Brandon Schloss, Christopher Slaughter, and Connor Yeackley, went 4-2 in preliminary rounds and placed 32nd out of 175 WSD teams at the 2017 National Speech & Debate Association national championship tournament (despite essentially having only two weeks of practice sessions, including scrimmages in Coral Springs, Orlando, and Tampa). They lost in double-octafinals on a 2-1 decision to the top-seeded (and eventual runner-up) team from East Texas.

McDaniel was officially recognized as the 5th-best speaker out of more than 900 competitors in WSD. This makes her the highest-finishing Wellington debate student in NSDA history (and she has the trophy to prove it!).

In addition, McDaniel also went 7-2 in Extemporaneous Speaking, finishing tied for 19th overall (out of 915 competitors).

Our Debate weekend in a nutshell: 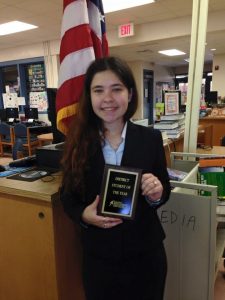 Caramen McDaniel is the Florida Oceanfront NSDA District’s “Student of the Year.”

Wellington has seven 1st Alternates to Birmingham. Thinking of changing our name to the #RedDawnBridesmaids.

His reaction was priceless, and I wish I had it on video.

He’s not heading to Alabama, but it was an interesting experience nonetheless …

I’m so very proud of my debate team. It’s easy to smile and laugh when things go your way, and far more difficult to persevere when they don’t. {This goes for students, parents, and – yes – coaches.} And as far as “tournament success, as determined by wins and losses” goes, it was a very difficult weekend. But life happens, and life goes on, and we are already looking at competitive options for the rest of the school year and beyond.

I’m so very thankful for amazing coaches in our district, and parents who are supportive. Your energy, professionalism, and involvement (and listening ears) helped immensely during and following the national qualifier tournament. Big props to Traci Lowe, Kristen Taylor, Angie Weber Anyzeski, Daryl Hall, Anna Hutcheson, Leah Carolan, Sue Ann McDaniel, Amy Yeackley, Deena R. McNamara, Kevin McNamara, Sara Altschuler, and so many others, plus (of course) our tournament host, Chris Cartagena (who is no longer on Facebook, but deserves a shout-out!). 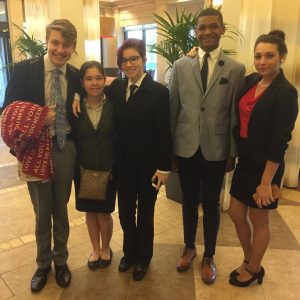 Caramen McDaniel placed 3rd in the supplemental (and inaugural) Big Questions Debate event at the state debate championship tournament in Pensacola. In addition, the Public Forum Debate team of Caramen McDaniel & Connor Yeackley ended preliminary rounds as the Number 3 seed in the tournament, before being upset in octafinals. They were they only team to hand the eventual state champions from Nova a loss the entire weekend.

Eight members of Wellington Speech and Debate were invited to hear Florida State Senate Appropriations Chair Jack Latvala and State House Speaker Richard Corcoran speak at the Forum Club of the Palm Beaches luncheon in February 2017: Those in attendance were Sara Casey, Nancy Foti, Mason Graham, Zachary Jacobson, Rebecca Kokot, Caramen McDaniel, Brandon Schloss, and Connor Yeackley. Caramen McDaniel asked both speakers their opinions on President Trump’s business holdings while holding national political office, what advice they would give the president about this situation, and what they believed was the best manner in which Trump could resolve this issue. 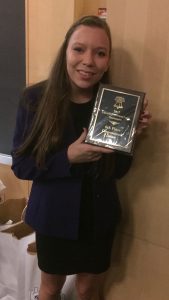 Wellington continued its strong historical presence at the UPenn Liberty Bell Classic. Sara Casey placed sixth in Congressional Debate, and both Matias Galguera and Bennett Aikey were recognized as the top presiding officer in their preliminary chambers. And the Public Forum Team of Caramen McDaniel & Julie Cesta advanced to octafinals as the 17th seed, finishing with a 7-2 record overall.

It was a two-for-one Red Dawn Debaters weekend. Caramen McDaniel and Bennett Aikey represented Wellington in Congressional Debate at the 62nd Annual Barkley Forum for High School at Emory University in Atlanta, while Zachary Jacobson places 2nd in Dramatic Interpretation and 6th in Informative Speaking at the Maverick Invitational on the campus of Archbishop McCarthy High School in Southwest Ranches. 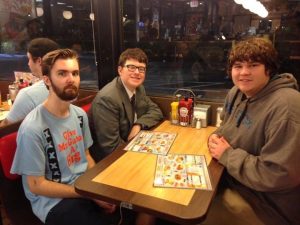 The Public Forum Debate team of Caramen McDaniel & Connor Yeackley advanced to quarterfinals at the 2017 Sunvitational in Ft. Lauderdale. It was their furthest advancement at a national debate tournament, and included taking down the Number 3 seeded team from Bronx Science in double octofinals. In addition, Bennett Aikey earned a gavel as the best presiding officer in his Congressional Debate chamber, and Zachary Jacobson, Emma Yeackley, and Joseph Long earned new National Speech & Debate Association degrees. Jacobson earned his Degree of Superior Distinction, surpassing 750 points, while both Yeackley and Long earned their Degree of Excellence, surpassing the 150-point plateau. 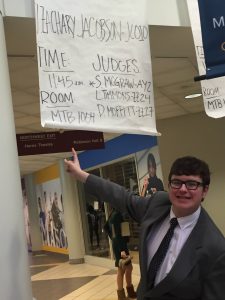 Wellington Debate: it was a job well done at the 13th Patriot Games Invitational at George Mason University!

Caramen McDaniel: quarters in Extemporaneous Speaking (23rd out of more than 170)

Zachary Jacobson: quarters in Informative Speaking (26th out of 63)

Matias Galguera: semis in Congressional Debate (top 60 overall out of 175)

This was our most successful and balanced Patriot Games Invitational performance ever. They represented Wellington proud! 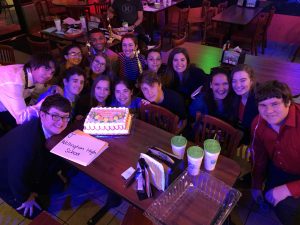 Wellington Debate WellingWon a WellingTon of accolades at the November 19, 2016 PBCFL at Seminole Ridge High School.

{Really Cool Note: Of Wellington’s 18 Congressional Debate entries, 16 earned an award or at least one judge rank, making this the most dominant legislative day in Wellington Debate history.} 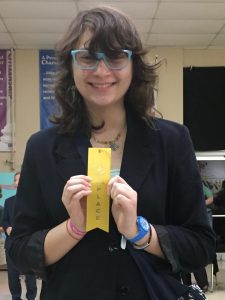 The 2016 Florida Blue Key Invitational was a successful venture for Wellington Debate. The Public Forum Debate team of Caramen McDaniel & Connor Yeackley advanced to doubles, finishing as one of the top 32 teams out of nearly 180 competing. Legislators Bennett Aikey, Sara Casey, and Brandon Schloss each advanced to the semifinal round of Congressional Debate. Connor surpassed 1,500 National Speech & Debate Association points, becoming the eight Red Dawn Debater to earn the NSDA Degree of Premier Distinction. Special thanks to our judges – Veneta Gilchrist, Narrelle Gilchrist, Victor Sanchez, and Jess Kane – for all they did over the weekend as well! Coach Gaba is extremely proud of his troops!

Around 75 area residents and students, including Wellington Principal Mario Crocetti and Wellington Councilman John McGovern, were in attendance during the Presidential Debate Watch Party at Wellington High School. 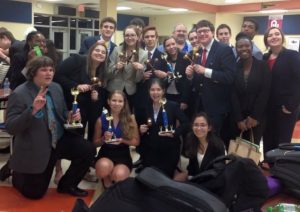 The Wellington Red Dawn Debaters went crosstown and put a smackdown on the competition Saturday! Here’s how things went down at the season’s second PBCFL tournament at Palm Beach Central High School: 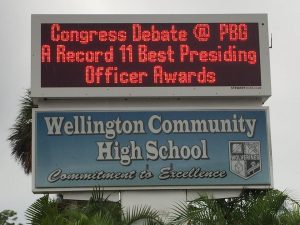 Wellington Debate was smaller than usual in numbers, but mighty in terms of the success they had at the first PBCFL tournament of its 2016-17 championship season. The PBCFL Congressional at Palm Beach Gardens HS on Saturday, September 24, saw excellent performances in both varsity and novice chambers: