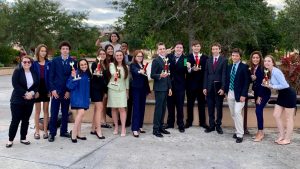 The November 2019 PBCFL was good to the Wellington Speech & Debate Team, as a number of competitors came away with hardware.