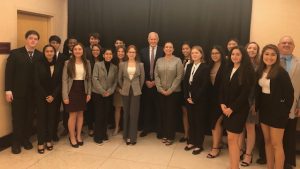 Eighteen members of Wellington Speech and Debate were at the Forum Club of the Palm Beaches luncheon Monday, October 28, where they met with, listened to, and questioned the in-house legal counsel of The New York Times, David McCraw. 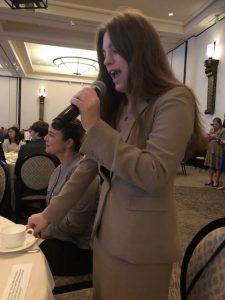 McCraw – the top newsroom lawyer at The Times for 17 years – has been the papers’ principal legal advisor on the Wikileaks and Snowden disclosures, as well as a range of Pulitzer Prize-winning stories, including the paper’s groundbreaking reporting on Donald Trump’s tax returns, Harvey Weinstein, and the secret fortunes of China’s political elites. Jordyn Bergman and Matthew McGann asked McCraw intense questions about the impact social media has had on the way how The New York Times investigates and reports news, and whether the continual cries of “fake news” over the past few years made it more difficult for media such as The New York Times to assert itself in the public eye. 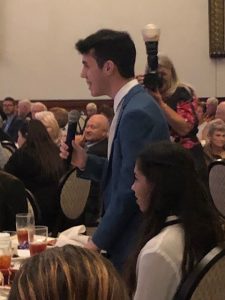 HERE ARE THE TWO MULTI-PART QUESTIONS ASKED OF MR. MCCRAW:

The student tables were sponsored by Kathryn Rossmell (of Lewis, Longman & Walker, P.A.) and Claudia Kirk Barto (of Junior Achievement of the Palm Beaches).