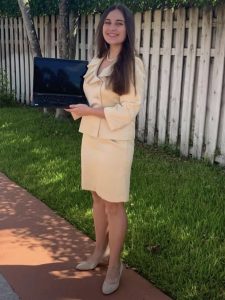 At the 2020 Yale Virtual Debate Invitational Tournament October 2-4, Wellington’s Jaiden Blinston placed 12th overall out of more than 100 competitors from across the nation in Dramatic Interpretation.

Her presentation of “Shoot Like a Girl: One Woman’s Dramatic Fight in Afghanistan and on the Home Front” by M.J. Hegar focuses on an Air National Guard major who was shot down while on a Medevac mission during her third tour in Afghanistan.